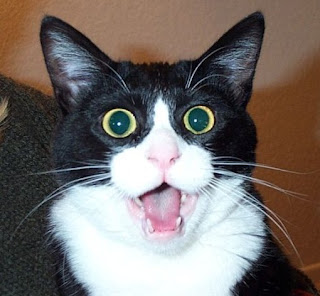 Yes, surprised cat! New paperback covers! We thought it would be fun to do something that would distinguish the paperbacks from the hardcovers, especially since the paperback version of Words of (Questionable) Wisdom will be coming out soon. What do you think? 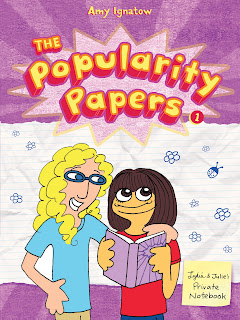 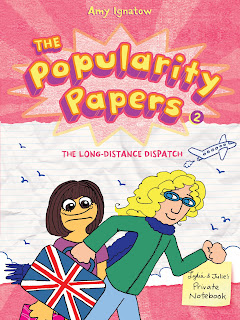 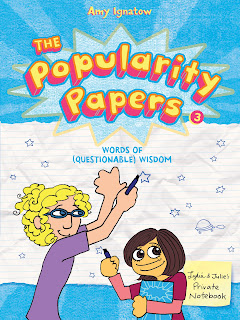 Also, just now I've learned that there are a lot of images of "shocked cats" on Google. 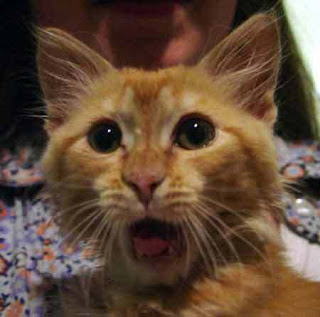 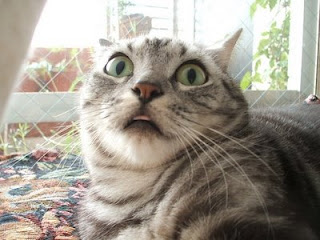 I THOUGHT I WAS THE ONLY ONE!!!
Posted by Amy Ignatow at 4:40 PM No comments:

And now, a Guest Post from Maggie the Wonder Editor! 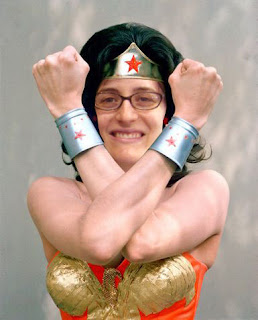 Hey, look, it's my editor, Maggie! I don't actually get to see her that often, but I'm pretty sure this is an accurate depiction of how she dresses to edit.

Hello! This is Maggie, Amy’s editor at Abrams Books. A few weeks ago, Amy and Publicist Overload Morgan asked me to write a little bit for the blog. I agreed right away before even stopping to consider that I didn’t have any ideas for posts. Ideas? Who needs ideas? Amy’s the one who comes up with the ideas and then sends them to me. That’s the way this whole thing works.

The Way This Whole Thing Works

A Popularity Papers book starts with an outline. Amy sends me a document that describes what Lydia and Julie are up to, who the new characters are, and some snippets of the funniest images and scenes. At this point, I look at how the book works as a whole and suggest any possible tweaks to the character arcs (how the characters change and grow over the course of the book).

Then Amy starts writing and drawing. She writes and draws for a while. During that time I’m waiting patiently at the computer, updating my email every few seconds, hungry for a glimpse of the book.

Okay, that’s not entirely true. I’m also writing catalogue copy for the book, creating factsheets, presenting the book at company meetings, working with the production department to find a place to print it the way we want to, making sure everything’s set with the contract, and brainstorming with the designer about the cover. And I work on other books, too, each of which need all that attention.

But I must admit it’s a very special day when the first draft of a new Popularity Papers book comes in. I am so lucky to be able to be the first person to know exactly what happens next. Lydia and Julie feel like old friends—or perhaps beloved nieces—and I read the new books with a huge grin on my face.

After that first joyous read, there’s a period of editing back and forth between me and Amy, then copyediting and proofreading (since the book is entirely handwritten, Amy has to make all corrections herself), and finally we ship it off to the printer and await proofs. We check over the proofs for any final mistakes or color issues, and when we’re sure it’s as flawless as we can possibly make it, it’s time for the book to print and ship.

The entire process takes about a year. Right now, we’re awaiting proofs from the printer for Book Five, and I’ve read the outline for Book Six. (So, yes—I know what’s going to happen! Shhhh… secrets…)

That’s a speedy review of what it takes to make a book. I didn’t even mention the pictures of Amy’s baby with food on her face, which is a huge part of our process. But if you have more questions, I will try to answer in the comments, or you can bug me on twitter at @maggielehrman.

Okay, wait a second. You don't actually just sit in front of your computer waiting for me to email you? You have other books by other authors to edit? WHUT??? 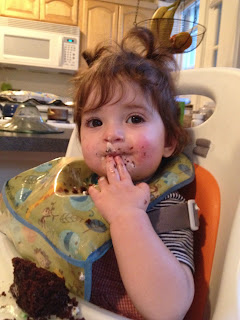 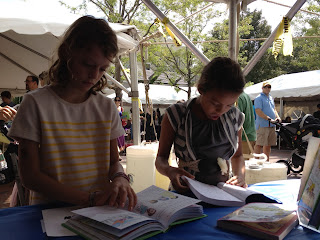 Dear readers, if you are squeamish about things like phlegm you may want to not continue reading, because I'm about to tell you all about it. A LOT. There will also be descriptions of all the great books and authors and readers that I hob-nobbed with yesterday at the Princeton Children's Book Festival, but mostly I'm going to whine about how sick I was.

I'd like to believe that this blog is read by eleventy billion people from all corners of the world, so it's necessary for me to set the scene and describe what the weather has been like in Philadelphia so that you readers in Ulan Bator can understand why having a nasty headcold right now is the worstest ever. It has been muggy. Unpleasantly warm and crazy muggy, the kind of swampy mugginess that turns normally curly hair into a frizzy face-eating monster, and the sort of oppressive muggy that attacks you like a pack of large and extremely affectionate wet dogs with no sense of personal space. It's been disgusting. This is exactly the weather that makes colds worse; not only is it hard to breathe because your nose is plugged up with snot, but it's hard to breathe because you're also drowning in hot soggy air.

I am sick because my daughter is sick. She is a baby and has no idea that it is considered uncouth to repeatedly coughing directly into someone's face. In the future when she understands words I plan to give her a good talking-to about covering up one's mouth in such situations (and also that it it inadvisable to smear one's snot on your mother's shirt, pants, arms, legs, neck, as well as your own hair) (BABIES ARE SO GROSS). So in addition to being sick, I am taking care of a sick baby, which means that my sleep is all jacked up and I feel terrible all the time.

Let's go to a book festival! After a sleepless night of depleting our garrison of tissue boxes I left poor congested Anya with my generous, loving husband, who is not feeling 100% himself (Anya is quite egalitarian about spreading her germs). Armed with a bag full of books, tissues, a thermos of water, a travel mug full of hot tea, a sketchbook, a ruler, and two cartoon vases of flowers made out of foam core because I didn't want to get stuck with another big, undecorated table like I had the last time I went to the Princeton Children's Book Festival. 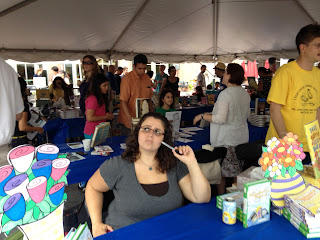 Looking not at all like the Spectre of Death at the Princeton Children's Book Festival. Check out the flower arrangements!

But there was no need to worry--unlike in previous years, the authors came to find their tables full of books and displays that had been put out by the people at Jazam's (a book/toy store in Princeton). It's completely amazing to sit behind a table with piles of my own books, particularly now that there are FOUR of them. It made it a lot easier to hide my box of Kleenex and pile of used tissues.

Writing and illustrating is a fairly solitary job, particularly when you work from home (as I do). As much as I love being my own boss and keeping my own schedule (HA HA, who am I kidding, Tilda is my boss) I miss socializing. So when I get the opportunity to both work and hang out with cool people, I go a little nuts. It's so exciting to talk with readers and librarians and other authors that a little thing like having no voice and my whole head encased in a phlegmblob is no obstacle. And so talk I did! I said hi to author friends (Eric Wight, Michael Buckley, Bob Shea, Erica Pearl, Lee Harper, and Mônica Carnesi) and made new author friends (Matt Luckhurst, Katie Kelly), and chatted with everyone who stopped by my table, which happened to be in the middle of the entire festival where everyone had to walk by. By the end of the day I sounded like Tom Waits (and not a young Tom Waits). I drove through a torrential downpour to get back to Philly, dragged myself into the house, collapsed on the sofa, and spent the rest of the evening communicating with Mark via text message. SAD. 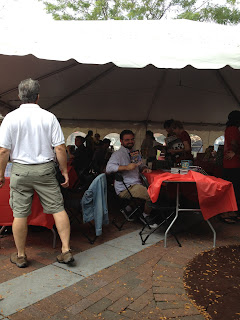 Eric Wight, who gracefully obliged to pose with his book after I used up a billion percent of my voice  yelling, "ERIC! HOLD UP YOUR BOOK! I'M TAKING A PICTURE OF YOU!" at him. 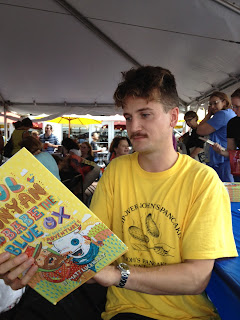 But it was totally worth it--I met some great readers and had a fantastic time. Sure, today I'm a practically useless bucket of boogers, but WORTH IT. 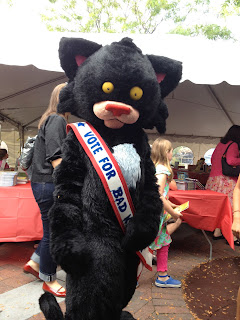 Not to ruin your suspension of disbelief, but there was a human person inside this cat outfit. By my scientific calculations it was 748 degrees inside this suit, and if someone could please let me know that the luckless person wearing the suit survived the festival, that would be great.
Posted by Amy Ignatow at 11:04 AM 1 comment:

The Awesomely Awful Melodies have been UPLOADED!!!!!!

Posted by Amy Ignatow at 4:28 PM No comments: